The entrance gates located someday on the Pushkin Square originally were called the Tverskie Gates after the Tverskaya road starting there and going to Tver, Novgorod, Dmitrov and Saint Petersburg. Nearby the Gates the Embassy Inn Yard where foreigners stayed was located. At the front gate to the capital a most ancient Moscow church rose — the Church of the Saint Dimitry Solunsky, patron of Motherland defenders. Later, in 1641, according to the order of tsar Mikhail Fyodorovich Romanov the second church in honor of the wonder-working Passion Icon of the Holy Mother of God was erected near the first one. Then the defense wall of Bely Gorod was dismantled, and a large square on the place of the former gates appeared. The Passion Convent with its majestic five-cupola cathedral and a pleasant bell-tower became the center of the square. That is why the square was called Strastnaya (Passionate). 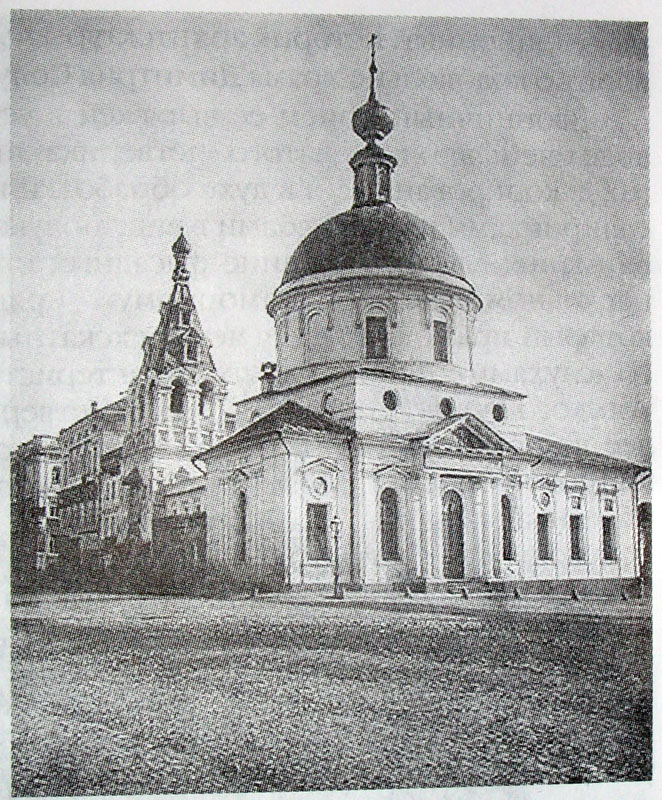 The Church of the Saint Dimitry Solunsky (it looked so in 1880, now there is no church there).

Near the Gates there is a Church of the Nativity of the Theotokos at Putinki, which is the last tent-construction church built before Patriarch Nicon prohibited the construction of tent-like churches.The Nativity church at Putinki consists of six exquisite tented roofs arranged in a highly unusual composition. Three candle-like tents, placed in a row, crown the church, while its refectory is surmounted by several rows of corbel arches and the fourth tent. The fifth tent is a belltower placed between the church and refectory. The porch also terminates in a pyramidal roof. This chutch is a chance to look at a unique Russian architectural style called in Russian divnoe uzorochie, which is a type of Russian barocco.

The house of M.I. Rimskaya-Korsakova earned fame due to balls and masquerades and was called "the House of Famusov”. Its constant guest A.S. Griboedov found practically all the characters for his comedy "Wit Works Woe” there. A.S. Pushkin often visited that house, too; it was said that he was attracted to the daughter of the host. 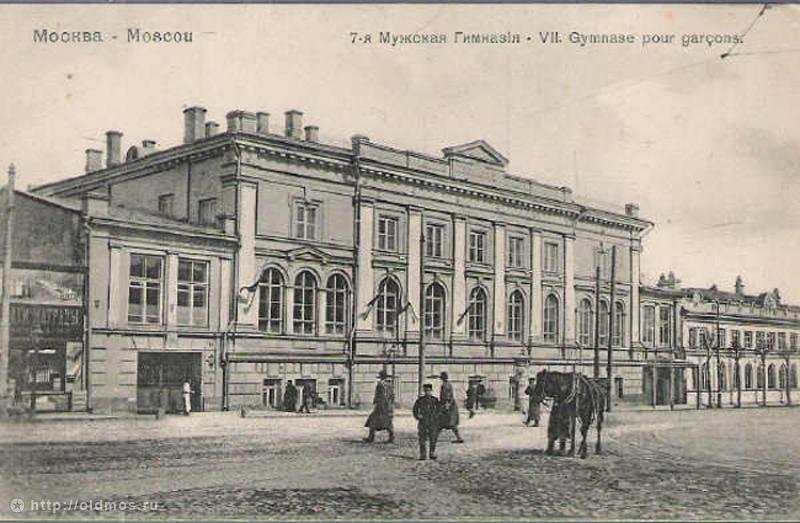 It is not by chance that the Tverskoy Boulevard adjacent to the square was chosen for a monument to A.S. Pushkin (sculptor A.M. Opekushin). It was the poet’s favorite strolling place. On June 6, 1880, the official unveiling of the monument took place.

In 1904 "the literature specification” of the square was supported by corner house No. 18 — a building in the modern style by architect A.E. Erichson, with the paintings made by a famous illustrator I.Ya. Bilibin. The publishing house of I.D. Sytin was housed there. Besides the classics and schoolbooks, Russkoe Slovo Newspaper was published there. On the ground floor a bookstore which the Muscovites loved was housed. To the opposite a famous Moscow apothecary was located Ferrein’s Apothecary. Instead thereof, there is the first McDonald’s opened in Russia now, iconic coffee-shop Lira (Lyre) was housed there at the Soviet times. 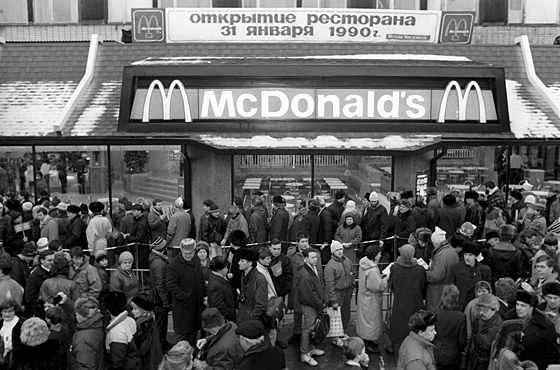 The first McDonald's opened in Russia on 31 January 1990 was located on Pushkin Square.

Most significant redevelopment of the square took place in the 30s of the XX century. In 1937 it was called the Pushkin Square: the Passion Convent had been demolished by that time already. Instead of the Church of Dimitry Solunsky a huge residential building appeared — a perfect sample of the Stalin architecture style performed by a talented architect A.G. Mordvinov. In the 1930s the office of Rabochaya Moskva Newspaper was housed there, then that of Moskovskie Novosti Newspaper, All-Russian Theatre Society, the Actors’ House. In 1990 the building burnt. Today Galereya Akter (Actor Gallery) Trade Center is housed there. In 1950 a minipark with fountains was laid on the square, and the monument to A.S. Pushkin was moved there at the place of the bell-tower of the Passion Convent. Behind the minipark Rossiya Cinema was built in 1961. Nowadays it was renamed to Pushkinsky Cinema. Nearby a new high-rise building of Izvestiya Newspaper rose there (1968 — 1976). "The House of Famusov” was dismantled, and Sytin’s house was moved 33 meters away in order to construct it. 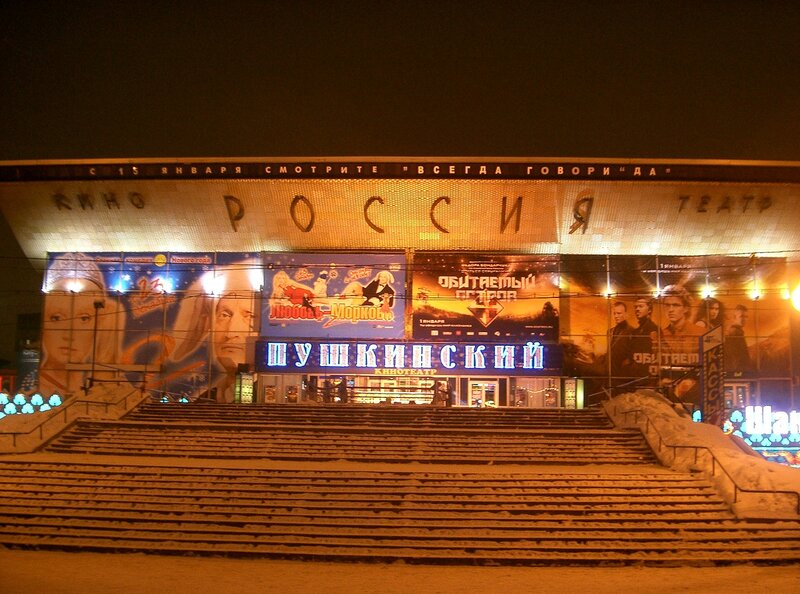 A picture of Pushkinsky (Rossiya) Cinema.