A walk around the University.

First of all to start your walk round the best and the most famous Russian university you should go to the "Universitet” metro station. There it is better to go out using the exit near the place where the last carriage stops.

Having left the station, you find yourself at the intersection of two major highways of the city of Moscow - is the area of Jawaharlal Nehru. It was named after the Prime Minister of India in 1982. Cross one of the avenues at a pedestrian crossing and walk down the Vernadskogo Avenue. In 1956 it was named so in honor of the eminent chemist, academician Vladimir Ivanovich Vernadsky (1863-1945). The Geological Museum, Institute of Geochemistry and Analytical Chemistry, where he worked, were also named after him.

Walk up the Vernadsky Avenue toward the center - against the traffic. On your right you can see one of the two Moscow Circuses - Big Circus on the Vorobyovy Gory, opened April 30, 1971. It was built by the team of architects and engineers under the leadership of J. Belopolsky. His projects were used to build many famous buildings in the south-west of Moscow. Circus on Vernadsky avenue is unique: height of the dome is 36 meters, there are 23 rows with 3300 seats. Also there are 5 interchangeable stages under the building at a depth of 18 meters. 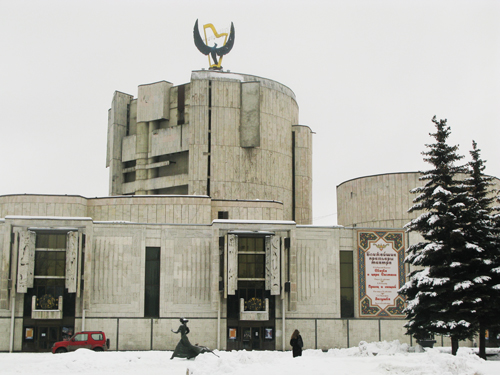 On your left there is the fence of the Moscow State University named after M.V.Lomonosov. It was founded in 1755. Just opposite the Music Theatre you can go through the gate and you’ll find yourself at the entrance to the First Humanitarian Building of MSU. Opposite the main entrance stands the stele in memory of the students and lecturers who died during the Second World War. Eternal flame burns inside the stele for their great deed.

Behind the monument you’ll see the massive main building of Moscow State University - one of the seven Stalin skyscrapers in Moscow.  It was built in 1949-1953 by architects L. Rudnev, S.E. Chernyshev, P.V. Abrosimova, and V.N. Nasonov. The building presents a detailed composition of the high-altitude part, surrounding buildings and courtyards. The main building of Moscow State University houses faculties, scientific library, university museums, the university administration, the assembly hall for 1500 people, student residences, apartments of teachers. There are rumours that somewhere in the basement one of the few stations of the secret metro line - the object of D6, better known as "Metro-2", can be found.

The road to the main building passes through many sports grounds of the University - football, basketball and volleyball fields, two stadiums on both sides. Then you cross the Lebedev street and go along the wing "E" of the Main Building to its main entrance. In this part of the building are located accommodation and hostels for students.

University alley leads from the main building to the viewing platform on Vorobyovy Gory. On both sides of the alley bronze busts of famous Russian scientists, many of whom are themselves graduates of the MSU, are exposed. There is also a bust of its founder, the first Russian Academician Mikhail Lomonosov, after whom in 1940 was named the University of Moscow. While the Sparrow Hills were on the outskirts of the city at the time of the construction of the main building, they are now about halfway from the Kremlin to the city limits.

By the way, the avenue and surrounding streets see the stages of the Championship of Russia on highway-ring racing every year. For this a track looking like one for Grand Prix of Monte Carlo, with seven left and five right turns, with a total length of two kilometers, is built.

After a couple of intersections University alley brings you to the viewing platform - a favorite meeting place of the Moscow bikers and street racers. It is one of the most popular with tourists place of the capital, the hill commands a marvelous view of Moscow. It is 100 meters above the Moskva River. From the platform you can see a ski jump, the Stalinist skyscraper, the Cathedral of Christ the Savior, Ostankinskaya and Shukhov towers and lots of other famous city buildings. But the first thing that catches your eye is a large Luzhniki stadium on the opposite bank of the river. You can go there and explore the are around Luzhniki later. To do this, go down, leaving the fence of the viewing platform on the left, pass the Church of the Life-Giving Trinity on the Sparrow Hills.

The Church as you see it today was built in 1811-1813. But the first mention of the existence of the temple in the village Vorobyovo dates as far back as 1644, and even in the harsh years of the 20th century the church was not closed.

On the way down to the waterfront you can see the stone memorial "In the name of the future of Moscow, prosperous and healthy city”, set by the mayor of the capital in the summer of 1998. If you go through the forest, located on the slope of the Vorobyovy Gory, you'll see the abandoned soccer fields and other structures left here after the summer Olympics in 1980 in Moscow. Fans of extreme sports can climb up on ruins there.

Now you can go directly to Vorobyevsky embankment. There is located the wharf of river buses, which regularly depart from there for a walk along the Moskva River, which we highly recommend you to try. If you already feel tired you can finish your walk along this route by climbing the Metro Bridge, where the metro station Vorobyovy Gory is. Another view on the banks of the Moskva River opens through the glass windows of the station. Nearby there are also stations Park Kultury and Leninsky Prospekt. You’ll get there, if you walk a little further along the Pushkin waterfront of Moskva River.