The architectural ensemble of the Square of Europe was opened near Kiyevsky Railway Station in 2002. Completed as a part of a joint Russian-Belgian project, the construction was led by chief architect of the Russian Academy of Sciences Yury Platonov, who was later awarded the Order of Merit for the Motherland, 4th class, in 2004. The ensemble includes 48 columns flying the flags of European countries, a building of glass, and a fountain with a sculptural composition of the Abduction of Europe. The complex’s total area covers 3,000 square meters.

The abstract sculpture by Belgian sculptor Olivier Strebel, inspired by the well-known myth of the abduction of Europe, was a gift from Brussels, in return for the sculpture of the great Russian poet Alexander Pushkin (by sculptor Georgy Frangulyan) presented back in 1999 — the year of his 200th anniversary — to the Brussels Town Hall. 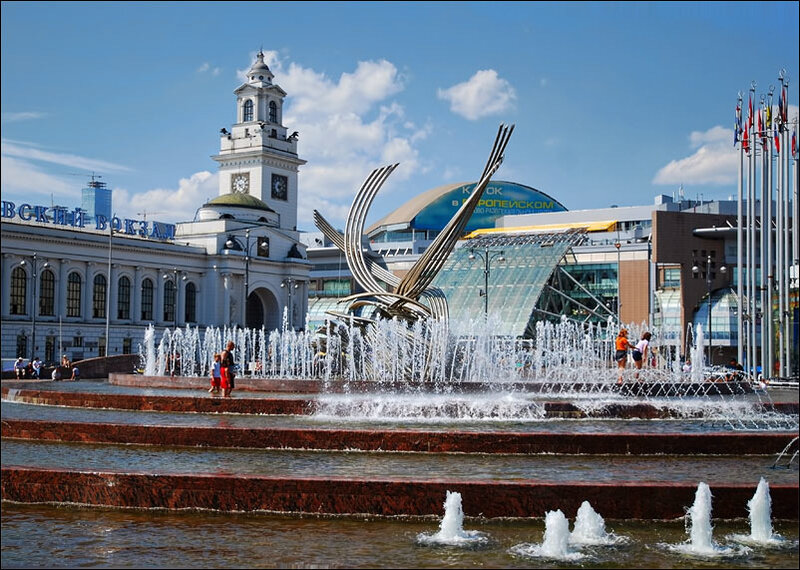 The composition set in the Square of Europe depicts gigantic silvery pipes of stainless steel, resembling the head of Zeus as a bull and the girl Europa between his horns.

The Square of Europe in Moscow bears witness to Russia’s — and particularly Moscow’s — profound integration with European civilization, the drive towards building a common European future.